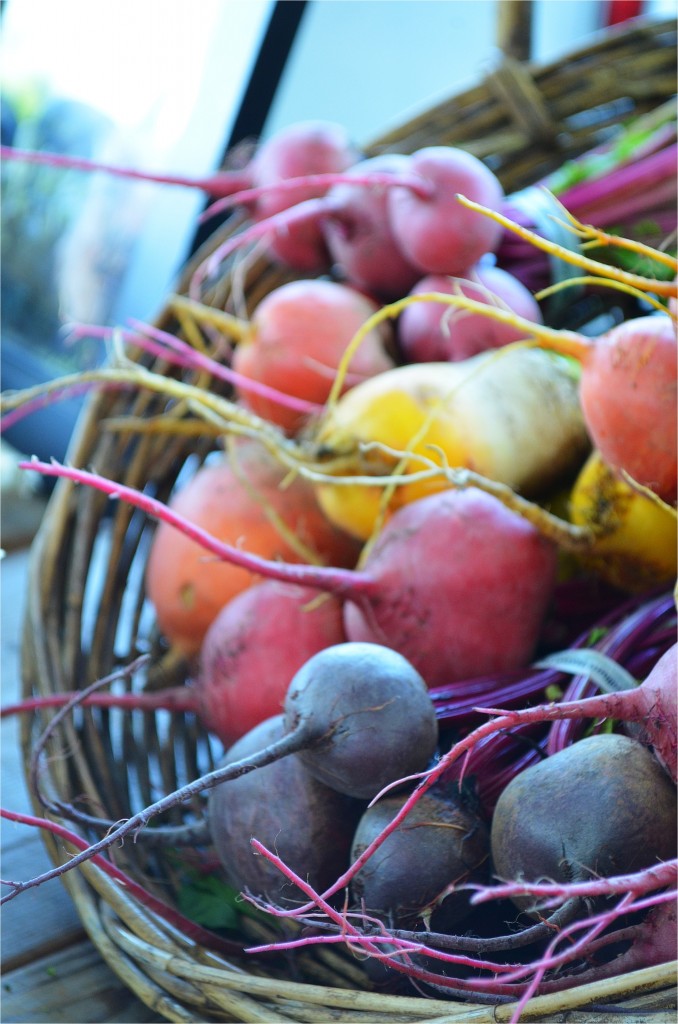 “The beet is the most intense of vegetables. The radish, admittedly, is more feverish, but the fire of the radish is a cold fire, the fire of discontent not of passion…the beet is the ancient ancestor of the autumn moon, bearded, buried, all but fossilized; the dark green sails of the grounded moon-boat stitched with veins of primordial plasma; the kit string that once connected the moon to the Earth now a muddy whisker drilling desperately for rubies…..” Tom Robbins 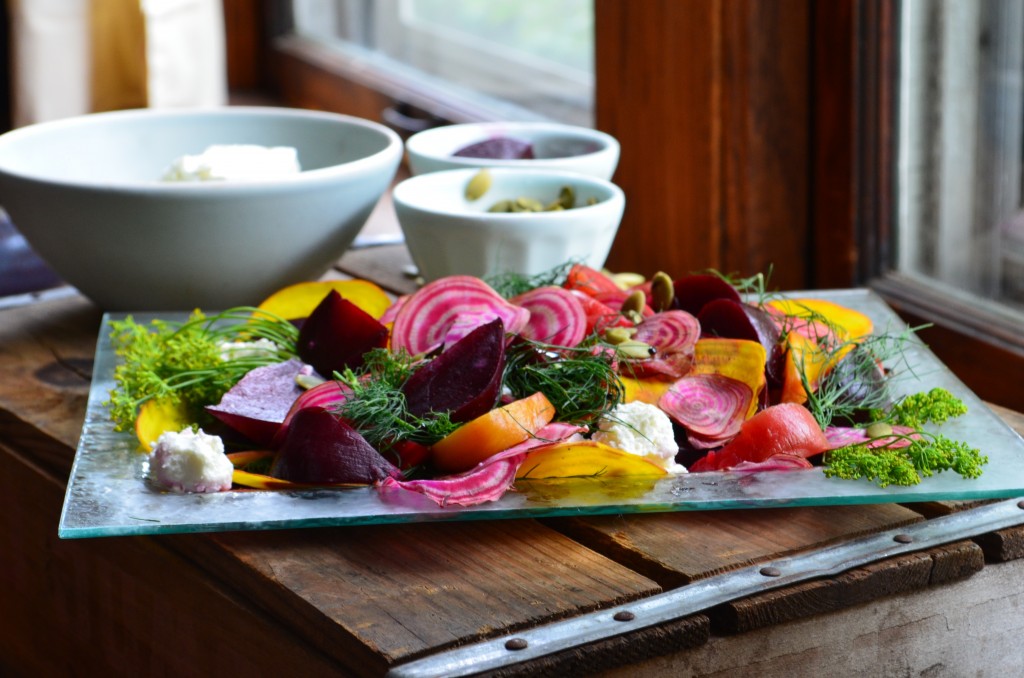 It’s Sunday at seven. The shadows are getting long and we have food on our minds with no options left in the cooler beyond some crackers and dried apricots. We are heading south toward Grand Rapids enjoying the two lane portion of 131 south and all it’s eccentricities…the concrete statuary, the tree filled with shoes…and feeling that feeling that comes when a weekend is drawing to a close and the next week lies ahead.

August in Michigan is heavenly. It is deep summer, the fields are dusted with flowers, vegetable stands overflowing with corn crop up in front of farm homes, the hay is being baled in the fields. The days are hot, the nights are cool, and you begin to see the random tree already starting to turn colors, an unwelcome reminder that this won’t last forever. 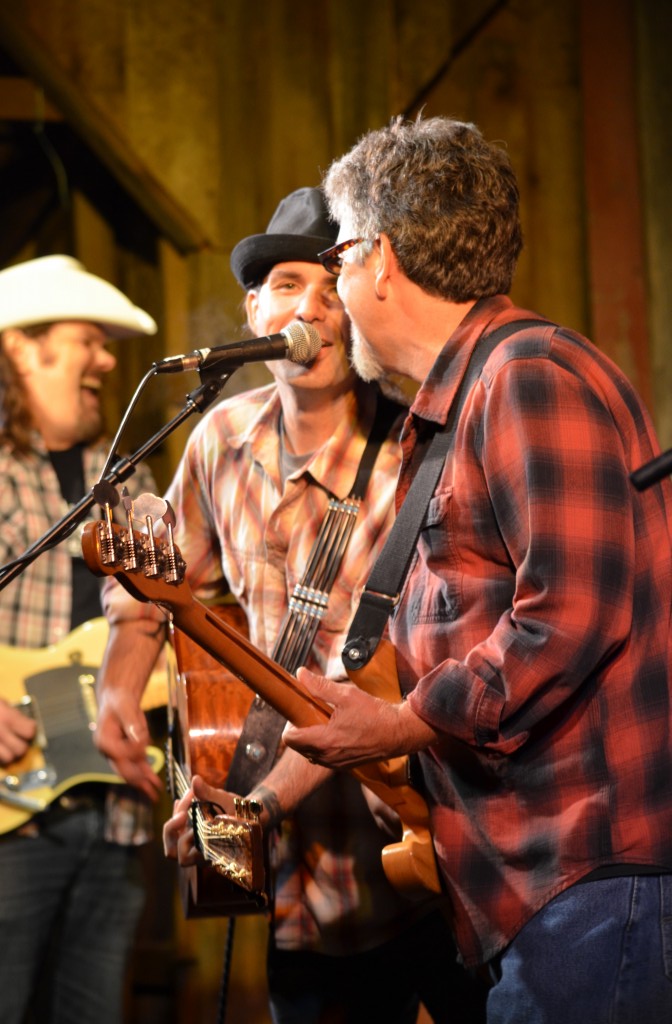 This summer has been full of music, friends, and food. I’ve been so fortunate to be able to travel around with Drew on some weekends for his festival concerts and house concerts. It’s been an exciting journey and I’m so lucky to be able to hear some of Michigan’s finest musicians on a regular basis. We are heading home from FarmFest, where Drew played two tight concerts with his band. We didn’t spend much time there but the setting was beautiful and the stage was one of the coolest I have seen. The festival is held on the grounds of an organic farm east of Gaylord, MI. It is a quaint festival with two stages and tents and various vendors dotting the woods that surround the main fields. After walking past a booth full of tie dye for sale, chioga beets popped into my head. Chioga beets (a.k.a. candycane beets) are the tie dye of the vegetable world. Visually, it is one of my favorite vegetables and the taste is hard to beat too. A milder beet, they fall in between yellow beets and red beets in flavor and look gorgeous mixed with their other-colored siblings, some dill, and goat cheese. 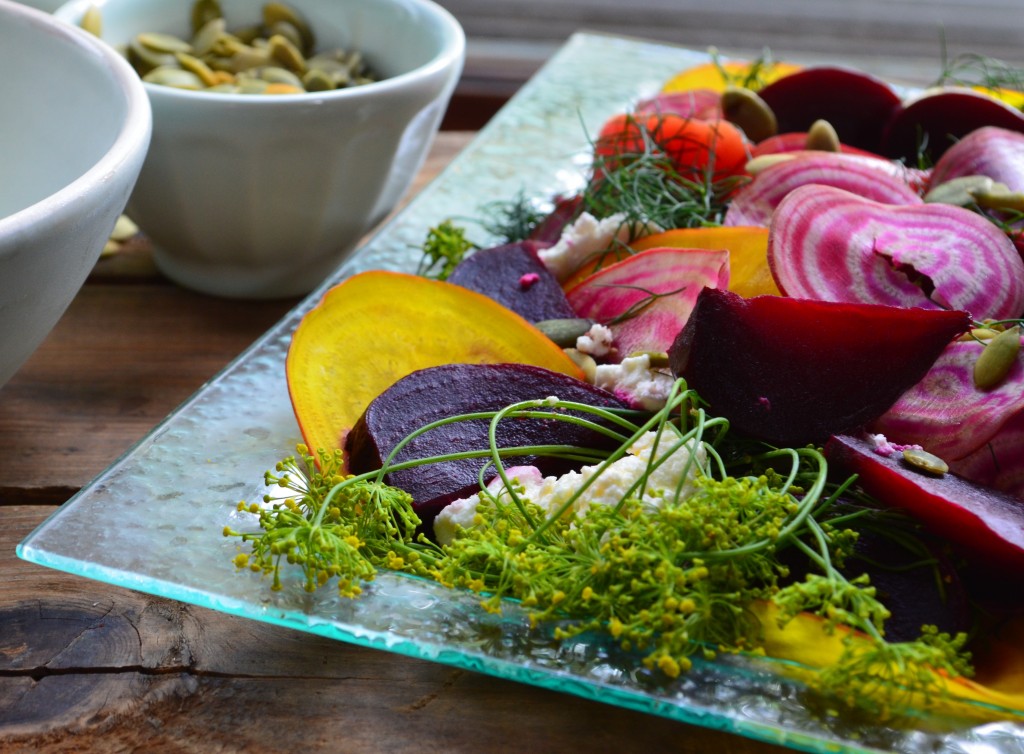 A couple of weeks ago I had a photo shoot with the Grand Rapids Magazine. They plan to have an article about Dinner With Aura in their October issue. I was asked to have a dish photo-ready so created this vibrant and flavorful salad (thanks for the suggestion, honey!), experimenting with the beets to find the best way to showcase their color and flavor. Some of the beets in this recipe are whole-roasted and some are shaved raw. To capture the brilliant color of the chioga beets as shown in the photos, you must shave them raw with a mandoline slicer (never, ever use a banjo, says my ever-wisecracking banjo-picking boyfriend….haha) or with a sharp vegetable peeler so you can see the beautiful patterns and can eat the beets with no trouble despite them being uncooked. Beets are also marvelous grated raw into a green salad and tossed with a vinaigrette. Experiment as you wish with the basic elements of this salad: beets, mild feta, fresh dill, honey-balsamic glaze, and raw pumpkin seeds. You can’t go wrong. 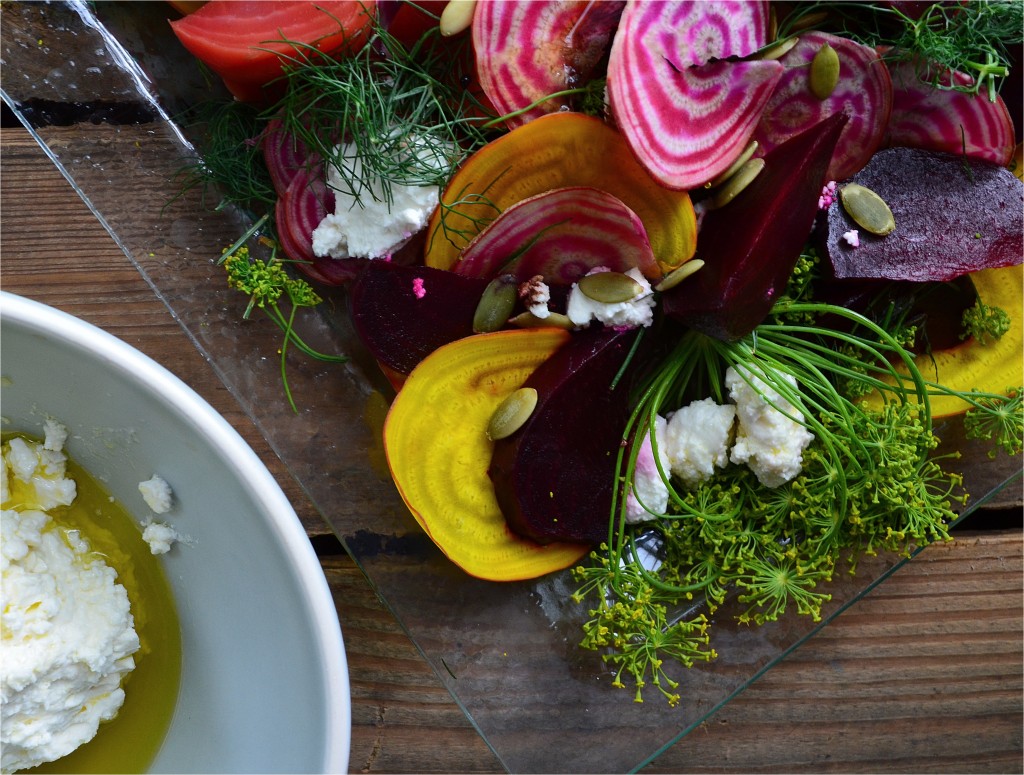